Lablab is good for food and fodder 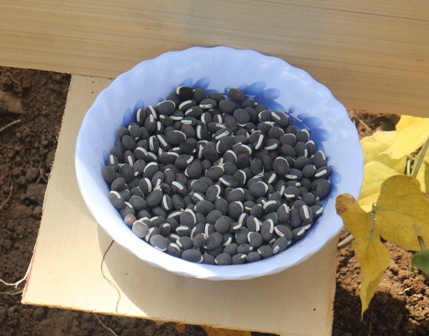 Lablab is a source of protein for both humans and livestock. The legume improves soil fertility, is suitable as a cover crop and can be rotated with other crops.

Forage legumes are important because they improve soil fertility through nitrogen fixation, have high crude protein in the leaves and foliage. They are rich in minerals (calcium, phosphorus) and vitamins (A and D complex).

Dolichos (Lablab purpureus) popularly known as njahi is a shortlived perennial or annual legume cultivated as human food, greenmanure cover crop and animal fodder. The young green pods and immature seeds are boiled and eaten. Locally, the young leaves are used as a leafy vegetable. The dry seeds are eaten as a pulse although they require prolonged cooking with several changes of water.

As animal fodder the whole plant is used as a fodder for cattle, either green or hay or silage. The stems are stronger and more fibrous than cowpea, and animals tend to eat the leaves only and leave the stems. It is an adequate source of the muchneeded protein and can be used in different ways; it can be grazed directly, as a companion crop to maize, cut as hay, or mixed with maize. Lablab hay is fed to animals to supplement poor quality maize stalks and hay.

It provides better late season grazing and has better compatibility with forage sorghum or maize when intercropped. It gives high yields of materials for conservation. Its dry matter yield is usually higher than for cowpea, particularly under drought conditions. It grows well on acidic soils and has better disease resistance, not easily attacked by insects such as beanfly.

Dolichos has a large seed and therefore does not require fine seed bed as that of lucerne. Highest yields are obtained on land that has not been cultivated previously (fallow land).

Space at 45cm between rows and 30cm from plant to plant (placing 2 seeds per hole). Place seed at a depth 5-7cm (or middle finger length) and cover gently and properly if erratic showers (rain) occur. Use 25kg seed of dolichos per acre. Use well matured composed at the rate of two handfuls per hole. For better results, inoculate with Biofix.

Harvest for fodder at an interval of 6 weeks leaving a stubble height of 15cm from ground level. Remove weeds whenever they appear. To get optimal yields in terms of quantity and quality, harvest at early flowering stage.

Dolichos can be conserved into hay or silage. It can be fed green to dairy cattle or as a legume supplement. Varieties include include DL1002, DL1009 and Rongai.